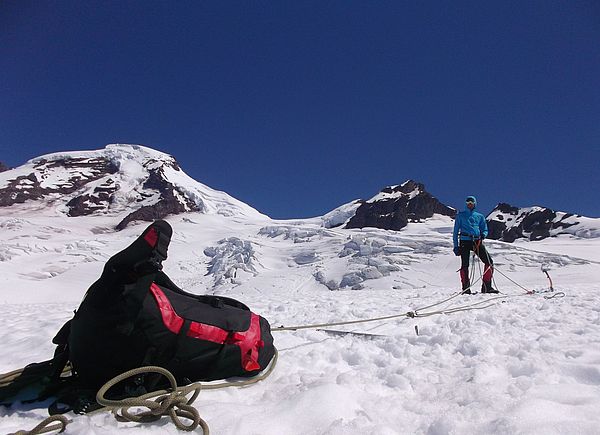 A little crevasse-rescue refresher is a good idea before heading out on the current route! 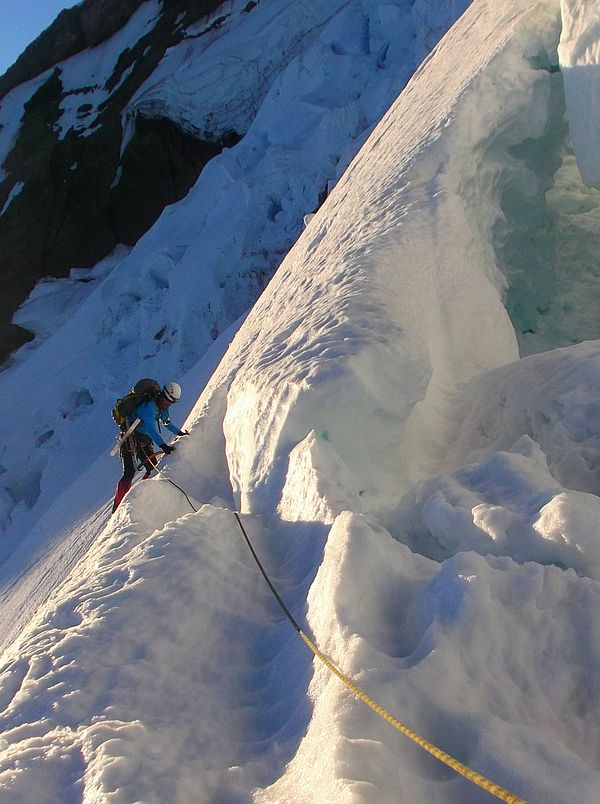 The traverse at ~8300' toward the North Ridge proper 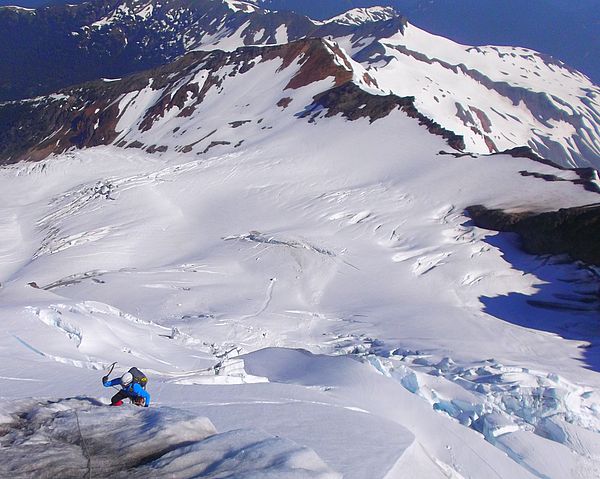 Rakesh enjoys the pure pleasure pitches of the North Ridge 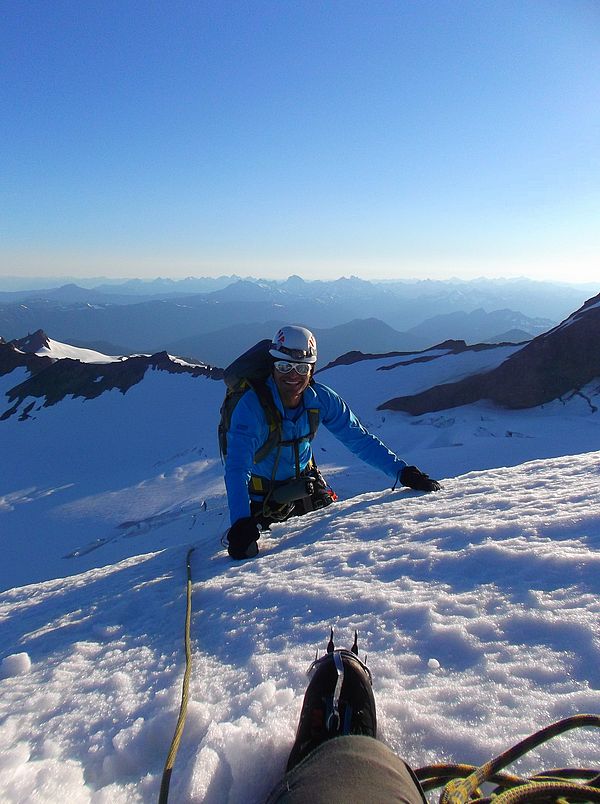 Top-out on the ice pitches 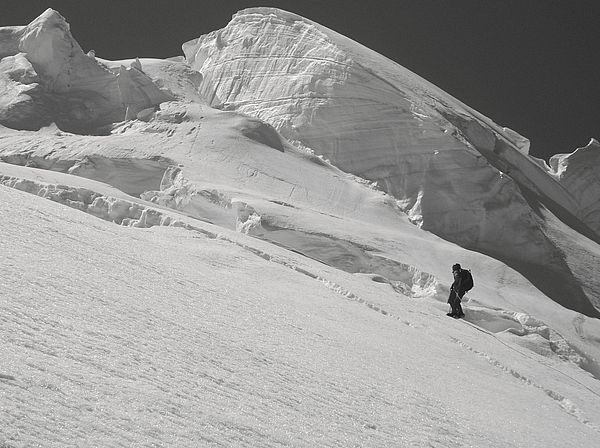 Upper section around 10,300'--go left/north instead 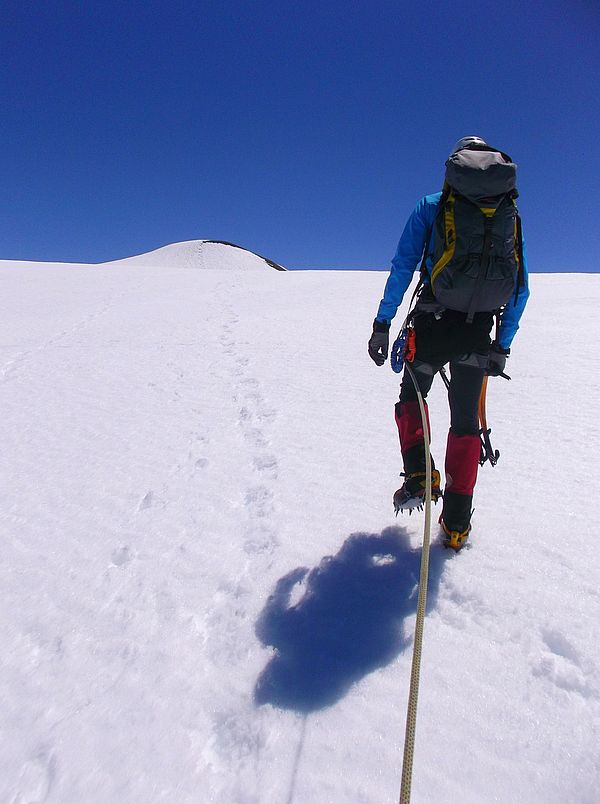 Rakesh takes us to the summit! 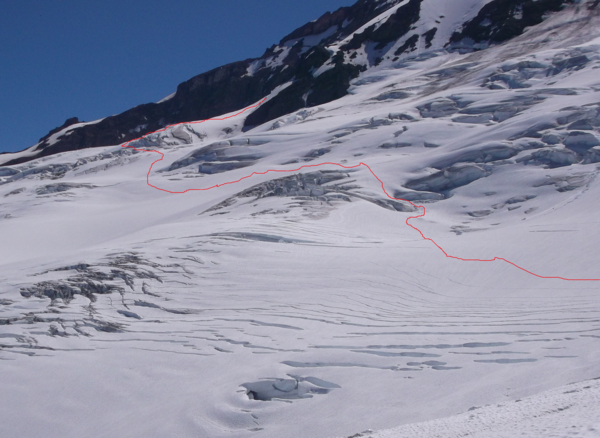 Our route across the glacier (click on image to enlarge)

Our GPS track of the route (click on image to enlarge)

Rakesh arrived at the Glacier Ranger Station looking as fit or perhaps moreso than I'd seen during last year's climb on the Emmons Route of Rainier. I knew he was ready for the North Ridge of Baker—the only question was, “Was the North Ridge ready for us?” From the reports I'd collected over the past week, it sounded like no one had been up the route, with some combination of weather, fitness, and route problems conspiring against them. Were we to not get up the route we certainly couldn't blame the weather—bluebird—and, as noted, it certainly wouldn't be due to fitness. The open question remained the route itself.

I had the benefit of some recon two days earlier, summiting via the Coleman-Deming in what might be record time for a septuagenarian (who plenty enough steam left to suggest a summit of Colfax, which we did). Being that he seemed so spritely, I suggested that we cruise by the North Ridge entry onto the Coleman on the way out. It looked like one of those weather forecasts on a day when you're torn as to whether to head up a big rock route—40% chance of rain. But that's still 60% chance of sun and success...

Arriving at our 6600' tent site in good time on July 10th, Rakesh and I headed out to explore further after covering some crack rescue (as it looked like it might come in handy out there!). There was an old boot pack which we followed for awhile, but then when we hit the generally crack-free plateau portion around 6600' beneath the Headwall area, the toe and sole prints of those tracks showed they were inexplicably headed up from the Chromatic Moraine then toward the Hogsback Ridge area, without even exploring the North Ridge options (perhaps they were doing an exit from the Chromatic Moraine as some kind of training?). We blazed our own path through the “funnel” depicted in the route photo (on left), then out to where the crevasse features lessen, then turned around for the day. From that vantage point, it looked like our best option would be to swing looker's left to the Roosevelt Glacier entry onto the North Ridge, as the standard/early season route was 'schrunded and had evidence of substantial rock fall. From there, the next morning we headed up as depicted in the photo with route drawn approximately (on left) and the GPS track shown--cleaned up slightly to eliminate deadends (also on left).

All was smooth until we hit 8300'. From there it looked like things would continue straight up the gut of the Roosevelt Glacier, but necessitate passage through a bit of serac hangfire. Right after the hangfire that route came to an abrupt dead-end, split across the whole of the glacier by a wide crack, so we returned through the bowling alley and investigated a ramp that I'd noticed trending out toward the rock portion of the North Ridge. It went—but necessitated several pitches of picket-protected traversing on steepish, somewhat unconsolidated snow.

The ice pitches went quickly, with climbing in the WI3- zone and straightforward protection. Things after that continued smoothly, with several pitches of good cramponing firm snow that varied between frontpointing/high dagger and flat-footing/cane angle. At 10,300 there appeared to be an option heading straight up toward the ice wall, in the general zone of the photo below, but that didn't pan out, necessitating a demoralizing loss of a few hundred feet of climbing—no big deal, but if you can avoid it, cut climber's left around 10,300' instead of heading straight up. Then you have to continue hard left almost until reaching a rock feature as you approach the Cockscomb Ridge, so as to avoid a crevasse maw. After that, it's a cruise to the top.

Times (Note: This is cumulative/estimate with fit climbers and some routefinding shenanigans thrown in—with a bootpack the time should lessen):

Route Notes (these are only subjective comments--use your own judgement):