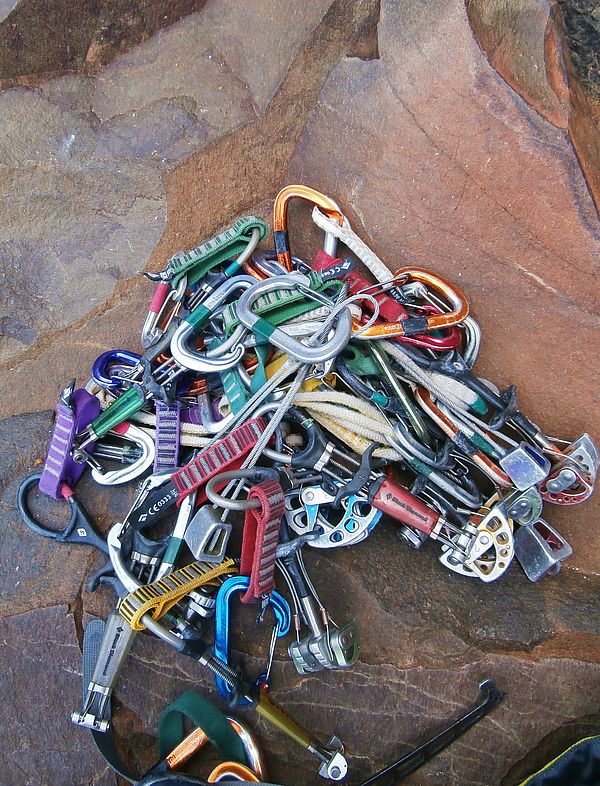 Look at pictures of trad climbers getting after it in any climbing magazine and you'll see an array of approaches when it comes to clipping your gear: a woman crushing her hands into some Indian Creek crack clipping directly into her cams, a fellow at Cannon Cliff pulling a roof with nothing but air and double-length sling underneath him, an alpine climber going au cheval on Mt. Stuart's North Ridge clipping short to a tri-cam. So, it's not surprising that recently a climber-client of mine just breaking into trad leading connected to ask just what is up when it comes to how and when to clip draws.

Speaking broadly, there are two predominate types of draws used in climbing: “Quick draws” and “slings.” Quick draws are favored by sport climbers, and even and many trad rock climbers, for their ease of use. Slings are favored in alpine environments (in fact, they're sometimes referred to as “alpine draws”) for their versatility (useful for slinging horns and threading chocks) or on meandering trad rock routes where rope drag is a concern. They come in two standard sizes: “Shoulder length” 60cm draws fit quickly and easily over your shoulder and they can also be doubled-up for convenient storage on your harness. “Double length” 120cm draws are a bit more cumbersome, but oh-so-useful for slinging big horns or eliminating rope drag when pulling a corner, going over a roof, or putting together a long pitch. So in a nutshell, you've got three kinds of draws and two choices: clip direct or clip a draw?

Deciding not to use any draw or sling is one option and it's useful in many situations, for many different reasons. For starters, clipping directly eliminates a whole step in the clipping sequence as there's no need to grab a draw off your harness, and then clip it to the pro, before clipping your rope. So it's speedy and efficient. But as is often the case in life—saving time in one area can squander it in another. Clipping short frequently tends to increase rope drag as the piece zig-zags from piece to piece. Soon you're doing Olympian-quality squats just to overcome the drag—as a climbing mentor of mine once said, “Never take a shortcut unless you have a lot of time.” Also, without a draw or a sling serving to absorb play in the rope as it is carried up the cliff, pieces of pro tend to walk more easily. Best case scenario, this means your piece is hard to remove; worst case scenario means you remove the piece quite easily when you fall on it. With these considerations in mind, clipping directly is best applied on smooth, steep, straight lines—splitter cracks on desert sandstone or Yosemite-grade granite. And, because stoppers tend to walk more easily than cams and because quickdraws don't absorb play in the rope as well as slings, clipping quickdraws into stoppers is best avoided.

Clipping direct is also quite useful on traverses. Depending on the situation, I am alternately amused or terrified to see how often people unthinkingly add draws/slings to their traverse pieces, thereby adding several feet to any potential fall they or their second may take. Clipping short won't eliminate your chances of taking a ride, but it'll shorten the length of the fall and it'll shorten the distance you're traveling over the rock (think about the diameter versus the circumference of a circle). This same idea holds true for the person seconding the pitch. Moreover, as traverses don't generally wander, clipping direct typically won't add drag.

So now, if you're a fan of Black Diamond C4-style “syringe trigger” cams and you're thinking critically here, you may now be asking, “So if clipping directly can be useful on traverses, how about clipping really directly—straight into wire loop?” While that's not verboten, according to Black Diamond it does weaken the holding power of the device by about 2KN. And if you're that concerned about falling, perhaps you should log added time on some more moderate climbs—a theme which takes us smoothly into the next scenario...

What about clipping directly on your first piece so as to shorten the length of the fall and potentially prevent ground impact? While it is true that clipping directly will reduce your potential fall by about 2 feet. Certainly there's something to be said for that—but speaking more broadly, I'd say that if you're that concerned about a ground fall, perhaps you need to get more comfortable at climbs a grade lower—the last thing you want is horrific rope drag higher up on a “redline” climb as you're hitting the crux.

One important last note about clipping directly is that in all of the above scenarios I make reference to clipping a cam. Don't ever clip directly to nuts, hexes, or tri-cams (or ice screws for that matter), as the play in the rope will send those things flying faster than a fat man BASE-jumping in his birthday suit.