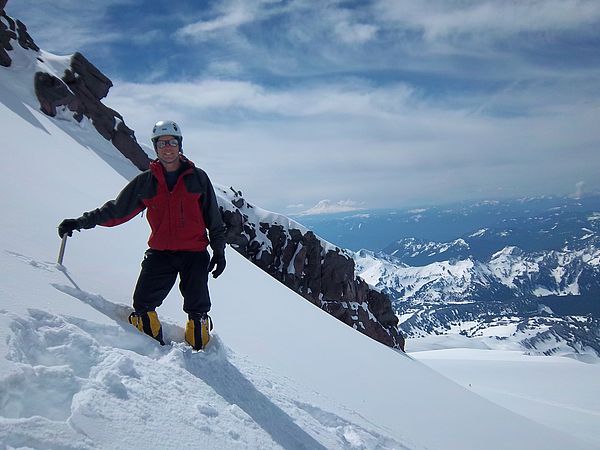 Memorial Day weekend is here! On my way down from Rainier Friday (May 27th)
I saw plenty of people on their way up.
I wish them a fine time but given the current conditions, I hope good
judgment will prevail over summit fever.
As is typical, on the way down a party going up asked if we summited…I
had to wonder if that group had done any research about the conditions leading
up to their chosen climbing weekend. If
you are considering climbing Rainier in the near future and are reading this, the
fact that you are reading this belies that you’ve got a better grasp on how to
prepare for a climb—and hopefully it belies that you’re not fixated on the
summit beyond reason.

I can tell you that from my May 23-27 stretch up there that
things were grim. The current forecast
isn’t much better, and I actually feel that may be a good thing: Even if the
skies cleared, it would do nothing to stabilize the snow that has accumulated
over the past five days. Those who
forget that a clear day after a storm can still be quite dangerous would do
well to review The Avalanche Bulletin article about last year’s Rainier
avalanche that swept eleven and killed one (http://www.americanavalancheassociation.org/tar/TAR29_4_LoRes.pdf
). Given the time and circumstances of
that event, the current situation may be similar.

All of this said, here’s what we experienced: Weather built over the course of May 23-27,
with the bulk of snow cresting on the 25th and wind cresting in the
early AM of May 27th. The combination
of precip and wind made it difficult to assess how much snow really fell in
total, but I’d estimate it to be around 8” total (?). The point though isn’t how much snow fell,
but how that snow is accumulating. Many
westerly facing aspects have been scoured clean and there is considerable
deposition on leeward sides. Prior to
this event, the Ingraham Headwall (the current route) had significant cracks
open in the 11,500-ish zone and around 13,200'. Some of the
RMI guides had fixed lines on the crack at 13,200', but there is no
telling where those lines are right now.
Additionally, these cracks and others may now be covered by rather thin and
not-too-stable windslab bridges. An IMG
guide who was up at Ingraham Flats on May 26th reported that he
could still see boot tracks from pre-May 23 going up the Headwall, indicating
the Headwall has been largely scoured, but I feel it very probable that in
between the scouring there are pockets of deposition that could be of
considerable concern. Those these
pockets might not cause a full burial, they could sweep a person into some
nasty places. It appears that as of today (Sat, May 28th) no parties have summited in the last few days. Speaking with RMI guides today (Sat, May 28th), they made it to 12,200' and found the bridging on the Headwall to be solid and the scouring to appear to have eliminated snow pockets--but use your own observations and judgment. It is also worth noting that they (and other guide operations) were breaking trail up to their highpoint, so if you're headed above 12,200' plan for a big push. I am in no position to
recommend or discourage anyone from a summit attempt this weekend, but anyone
choosing to do so should make sure that they are tempering desire with reason.

Below Camp Muir the route is well-wanded and appeared to be
getting a clear boot track established again.

Of course, the above report isn’t meant to be prescriptive—do
your own additional research about the previous, current, and forecasted
conditions, check in with other sources and make a sensible decision from there.
Feel free to contact me if you have any
additional questions and/or would like any of the latest GPS route files I
have.