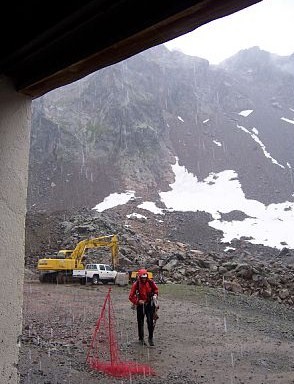 ...and rain in Chamonix 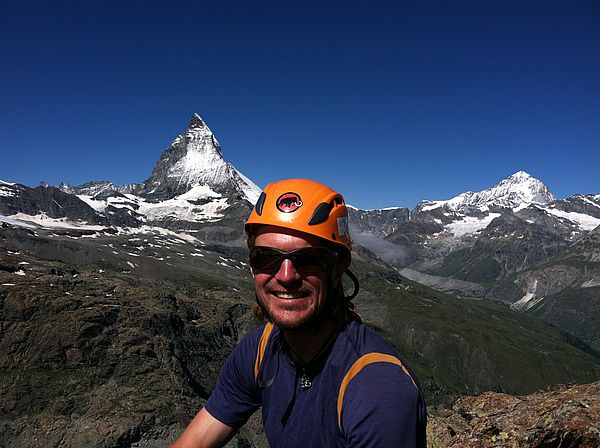 "It"--the Matterhorn, as viewed from the Riffelhorn--which we did manage to climb.

Coming in from Chamonix the drizzling day before my wife Alysse and I were bombarded by images of “it” everywhere. But for the whole of that damp day we had to be contented with six dollar cups of Zermatt coffee and seeing “it” only on kitchen spoons, jigsaw puzzles, envelope openers, and other kitsch—the real “it” remained lost in the clouds. Now gazing out of our tent in the clear blue morning, we were greeted by the signature lines of the mountain that made Switzerland synonymous with climbing—the Matterhorn. And though the weather in combination with our travel schedule put the kabosh on a climb of its fine lines, Alysse and I managed to salvage the day with some rock climbing on the Riffelhorn, enjoying an excellent vantage point on this Swiss icon, and an impeccable wrap-up to two weeks of summertime ice, rock, and alpine climbing blended up in the way that only the European Alps can provide.

Every summer while I'm out guiding in the west, Alysse is busy directing a French-language immersion program in Vermont and August is our “reset and reconnect” time. We've enjoyed that time in a variety of places, with the common theme being quality climbing. This year we returned (yet again) to the French Alps, looking to enjoy its sweeping granite grandeur while Alysse acclimatized for the Matterhorn. Yes, the Matterhorn's Hornli Ridge has a reputation that can include the words “chaotic”, “crowded”, and even “cliché”, but it is undeniably an aesthetic line and given Alysse's Swiss roots, it called out to us.

So, with fine weather at the start, we managed to hit the ground running in Chamonix, starting out with some rock routes in the Aiguille Rouge, then a stint camped out on the glacier beneath the Aiguille du Midi, where we scaled the Pyramid du Tacul and the Eperon des Cosmiques. A rain day provided time to rest up and plot out our next steps, which included more time on Aiguille Rouge rock and then on to the Aiguille du Chardonnet's mixed snow, ice, and rock terrain on the Forbes Arete and the icy South Couloir on Petite Fourche (what a pleasure to be scaling ice in August temps!). Along the way there were so many vivid and varied moments, but the image of morning sunrise glowing warmly on cool, sweeping orange granite provides the common thread.

Beyond the beauty of the mountains, there is the culture and history in the valleys—people who have been living and breathing these mountains for hundreds and, arguably, even thousands of years. Seeing this history and this living mountain culture made me appreciate in a more substantive way the celebration of Mammut's 150th anniversary, for while I'm something of a newcomer to the European Alps enchantments, Mammut has been building and testing it's gear here since the mid-19th century. Mammut is steeped in Alps climbing culture and has conversely and symbiotically also helped to create that cultural history. This was our fourth trip to Chamonix and I still feel like we've only begun to scrape the surface of what's possible in this alpine playground. And though we didn't get to climb on the Matterhorn, the image of its fresh snow robes is etched in my mind and I'll likely be back. Having a few chapters already under my belt, and having just finished another, I look forward to the personal history I'll be creating in the Alps long into the future.

You can check out more pictures and details from our climb time in the Alps at the Adventure Spirit Rock+Ice+Alpine Experiences Facebook page.