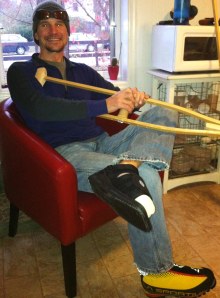 This winter season, La Sportiva launched it’s newest Batura “platform”–the sleekly-sophisticated-or-software-sounding “2.0.” There are several new design modifications that have made these things hot tickets–they are currently back-ordered until estimated January 2013–but I was able to get my foot into a pair, or errr, actually only one  (see photo) by way of the good folks at Outdoor Gear Exchange.  The Batura has long been a standard for ice climbers looking to bridge the gap between cold weather comfort and vertical ice performance, its nearest rival being the Scarpa Phantom Guide or the Ultra. The 2.0 looks a lot like its antecedent the Evo, so what’s the new sell?

According to La Sportiva, the new 2.0 version ups the Batura ante primarily in two ways. It adds a Gore-Tex integrated gaiter and zipper, but most notable is what it adds for the little shivering ice climber in all of us: a carbon honeycomb sole that purportedly accomplishes several things. The idea behind the honeycomb construction is that it stays lightweight (shaves almost a half-Nalegene of water’s worth of weight–16oz–off of a pair) and provides an area of “dead air space” to lessen conductive heat loss from the foot to the ground and/or crampon. Moreover, it provides exceptional rigidity in a thin package. The Honeycomb Tech carbon is a scant 3mm thick. What that translates into is a closer fit and feel between your foot and your crampons, and hence the rock or ice medium you’re scaling. Putting the 2.0 alongside the earlier-edition Batura Evo or any similar boot like the Phantom Guide or Kayland 6001, you can see the difference immediately.

So all of the above is the word on the street for the new 2.0 and I’m really ramped up to try them out…unfortunately, I’m currently doing a several-week-long test of the Darco MedSurg (see photo). After coping for several years with a problematic nerve in my foot, I finally asked the doctors to remove it last week. November is a good time, riding the rough edge between autumn rock and winter ice, but it does put me out of the loop for a few weeks, as the only boot that’ll currently fit on my left foot is the Darco MedSurg. Like the Batura 2.0, this baby is lightweight. In fact, it blows doors off the Batura, shaving a pound off the La Sportiva’s weight. But, when it comes to the warmth, rigidity, and the precision fit and feel needed for ice climbing, the Darco MedSurg ain’t got nothin’ to say. If you need this boot, buy it, otherwise stay away!

Believe me, I’m looking forward to offering up a more thorough and informed review of the Batura 2.0 as soon as I’m able. But, in reality, not a lot more on the Batura could be said than has already been hashed over at-length on the Coldthistle Blog website.  If you’re thinking you might like to purchase these boots, it’s definitely a must-read.  The writer has chronicled the life and times of the Batura since it’s inception and if you scroll waaaay down to the end of the page you’ll find his latest chapter on the 2.0 . But, enough reading about climbing boots for now—anyone who can climb should be getting out there and after it—I know I’m sure looking forward to it!