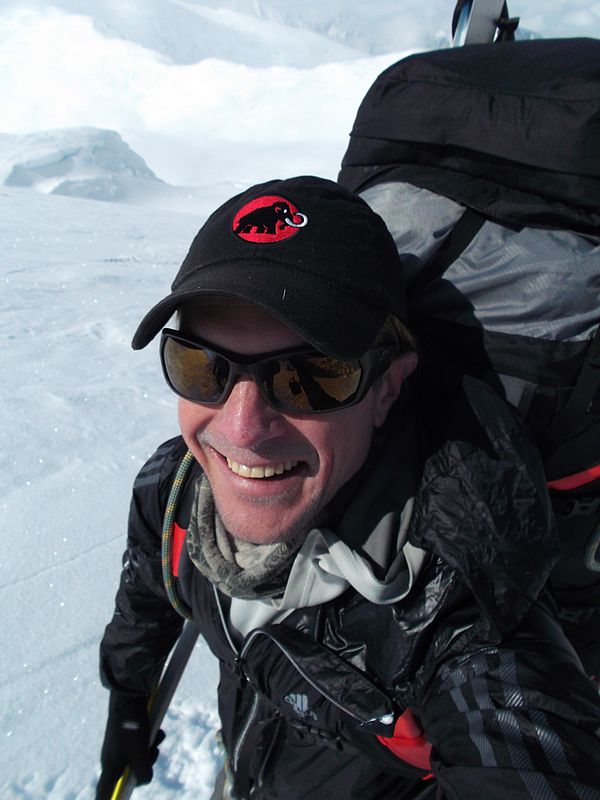 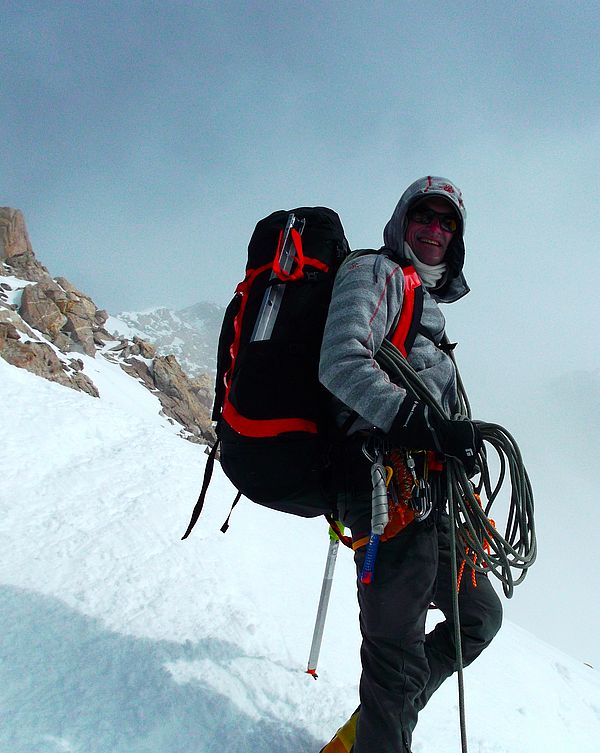 Valuing the body-matching performance of the hip pivot system while high on Denali. 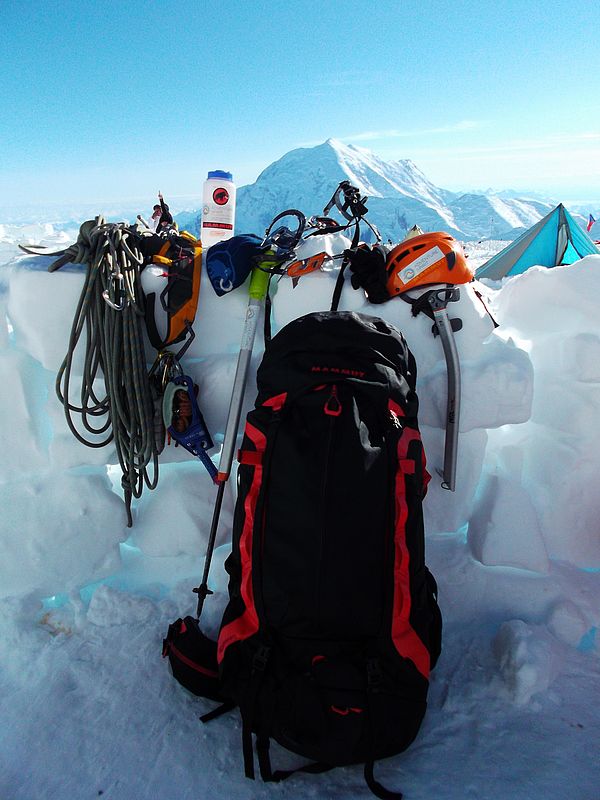 Still Life of a Denali Climber: Tools of the trade, with Mt. Foraker in the background. 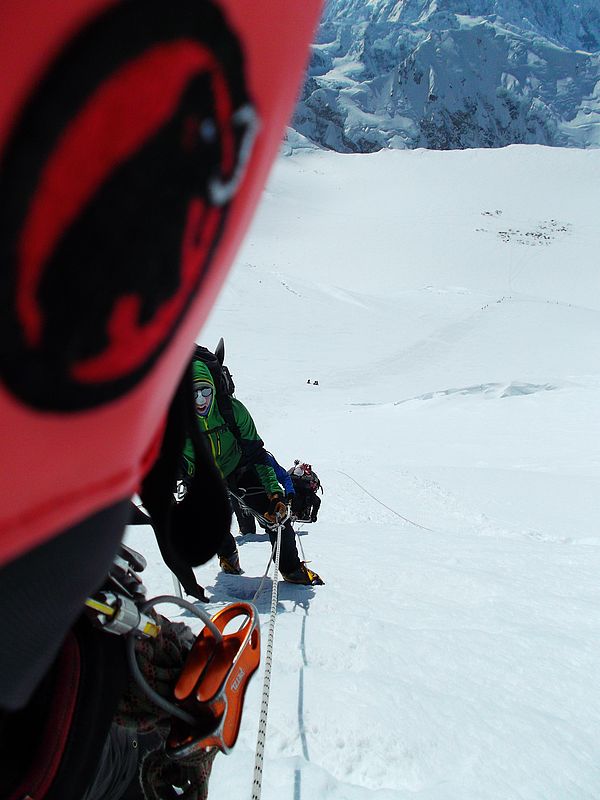 Happy to have the Heron's balance of load carrying capacity and torsional performance on the steeper sections of the West Buttress.

I grew up in Washington State on the Puget Sound, so I had plenty of time to watch herons in action. They are large yet delicate creatures, able to plod along in the marsh for hours, always ready to act with precision when the moment called. With those memories in mind, it is only logical that Mammut's expedition pack be called the Heron Pro. This 85+ liter beast is well primed for Denali/Mt. McKinley style expeditioning, as evidenced during the trip I recently guided with Rainier Mountaineering Incorporated on Denali's famed West Buttress. If you're considering a Denali climb or are looking at an expedition pack for alpine objectives like the New Hampshire's Winter Presidential Traverse, Winter Adirondacks High Peaks climbing, or Winter Maine's Katahdin/Baxter peaks, you'll be interested to hear about this pack. Though it's just now catching on in the American expedition market, it has a lot to offer arctic/winter/high-altitude climbers in terms of carrying capacity complemented by performance design.

Straightaway, I have to say I was a hard sell for another Denali pack. On previous trips up the West Rib and the West Buttress I'd worn a pack from another brand (also named after a bird). That pack was amazing at swallowing loads, but it carried them with the elegance of a Dodo Bird. The Heron Pro was a refreshing change of pace. If we were talking about load-swallowing capacity the Heron Pro would be better termed the “Pelican Pro”. The pack is rated at 85+ liters, but between the accessory storage and straps it easily out-performed other climbers' packs rated at 100 liters.

And if we're talking about performance, the Heron Pro's hip-torsion system puts it into “Hummingbird Pro” terrain. It's suspension system is miles ahead of packs designed for similar-style West Buttress expeditions. Some people may say the West Buttress is a “walk-up” route, but those people probably never made it past the 14K Camp. Things get a bit steep and balance-y between 14-17K, where the route finally gains the exposed West Buttress proper. Navigating fixed lines and some knife edge ridges with 2000' of exposure on either side, I was happy to have the hip pivot feature on the waistbelt helping me out with balance along the way.

I like my packs fairly simple, and I've never seen the point of a special compartment for the sleeping bag—it wastes valuable space—so I cut that out right away. I could also do without the weight of the zipper added to access the lower “sleeping bag” area. And I'm not quite sure what the little plastic clip on the right side of the waist belt is intended for—losing my keys? Lastly, my Heron Pro is the 2012 model, so it has ice axe loops; the 2013 model doesn't have those, but that is an easy sewing fix—or stash your ax in the side compression straps. Those points made, I appreciated the other features provided by the Heron Pro. The top lid's main storage and mesh storage on the bottom side both worked well for quick stops on the glacier—that's where I typically put lunch, a liter water bottle, a hat, a buff, and some glove layers . And the additional storage area on the back of the main pack was useful for storing and accessing my wind shirt, some electronics (GPS/transceiver/Ipod), basic repair/first aid items, and a toiletry kit (though a slightly beefier zipper would be useful over the long-haul).

The one compartment I was really surprised to find myself liking was the zip pouch on the hip belt. In the past I've not been much for this kind of stuff, finding it kind of gimmicky—adding weight and just being one more thing to break or get in the way of my harness. But in Denali's intense glacial 24-hour sun environment and marginal hygiene conditions, I found it a super-handy place to keep sunscreen, lip protection, and hand sanitizer at the ready. That said, our Mammut designers might as well maximize the space on the other side of the hip belt with a simple gear loop—I hope to see that easy, lightweight addition on future models (and get rid of the plastic key latch!). Lastly, the stretch fabric pouches on either sides of the pack worked perfectly for storing pickets, avi probes, wands, and other long items—I hope our designers add this to the Trion pack in the future (see my TrionGuide pack review).Taken in whole, the Mammut Heron Pro pack proved to be a very worthy Denali/Mount McKinley pack. I saw several European teams using this pack, but it hasn't yet been adopted widely by American teams—we'd be wise to pick up on this, as the Heron Pro offers excellent load storage and access features coupled with a precision carrying system useful during the challenging sections of Denali's West Buttress. I would also recommend this pack highly to my Northeastern climbers looking to do a Winter Presidential Traverse, Winter Katahdin Trip, or an extended Adirondack High Peaks Winter Alpine Trip with Adventure SpiritRock+Ice+Alpine Experiences. I recommend it for those same reasons, as these trips couple a need for load-carrying capacity with technical maneuverability.At times in my guiding of high-altitude peaks like Denali, I've seen that some climbers tend to grock out on the technical details of all of their equipment, doing so at the expense of actually doing the necessary training for their climb. All the reading of blog posts about gear reviews and the like won't take the place of physical and mental readiness, but once you've got those boxes checked, you'd be wise to consider the Mammut Heron Pro as your pack of choice for the climb ahead. Onward & upward!